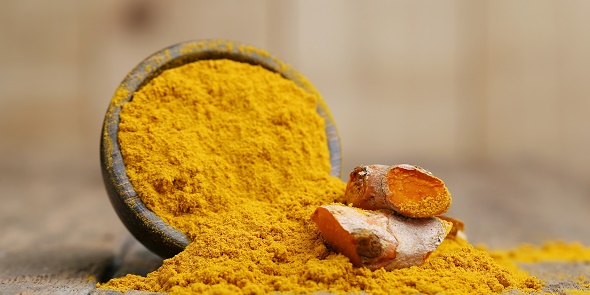 Turmeric is a herb with the botanical name Curcuma longa. Turmeric is native to India and South East Asia and is now cultivated in many countries of the world.

Turmeric has been used as a medicine, spice and colouring agent for thousands of years. The herb is often imported as a pre-prepared finely ground, dark yellow powder. The rhizome (part of the root) is the part of the plant that is used medicinally. Turmeric contains an essential oil that consists mainly of sesquiterpene ketones, sesquiterpene hydrocarbons and diarylheptanoids.

Aspirin should not be given to children under 16 years of age unless specified by a Doctor.

Always consult your Wizard Wellness Practitioner to advise you on dosages and any possible medical interactions. This information is in no way intended to replace the advice of a medical practitioner.

Turmeric may help reduce inflammation. Turmeric is believed to help manage conditions such as arthritis, dysmenorrhoea (painful periods), injuries, asthma, infections, eczema and psoriasis. When managing arthritis, it is recommended to use Turmeric in combination with analgesic (pain relieving) herbs for effective symptom relief.

Turmeric may aid in the management of heart conditions and strokes. Turmeric is thought to have an aspirin like, anti-platelet activity. This means it may help reduce the 'stickiness' of blood and prevent clot formation. It may also help lower blood pressure. Turmeric has also demonstrated a cholesterol lowering effect in animal studies.

Turmeric is thought to act as an antioxidant. Turmeric may also be useful as a protective nutrient for individuals exposed to carcinogens, e.g. workers in the chemical industry, farmers, road workers and smokers. The antioxidant activity of Turmeric may also help prevent fats in the body from becoming rancid (lipid perioxidation) and causing free radical damage. Diseases believed to be associated with free radical damage include atherosclerosis, cancer, inflammatory joint disease, asthma, diabetes, senile dementia and degenerative eye disease.

Turmeric is thought to protect against ulcer formation. Turmeric may improve the production of gastric wall mucus. This protects the stomach wall from ulceration damage. Turmeric may also have a protective effect on the liver.

A diluted solution of turmeric oil may relieve fungal and bacterial infections of the skin.

Turmeric may demonstrate an anticancer action. Turmeric is believed to help prevent healthy cells from mutating into cancer cells and inhibits the growth of existing cancer cells. This activity may be linked to the antioxidant and anti-inflammatory properties of turmeric.

Turmeric is believed to act as an antioxidant, antifungal, anti-inflammatory, cholesterol lowering and antimutagenic agent.

CAUTION: Some people may experience an allergic reaction to Turmeric, e.g. dermatitis. To avoid blood clotting, high doses should not be given to patients taking certain medications. Ask your Pharmacist or Doctor for advice on possible interactions. Turmeric may affect fertility levels and should be avoided by women wanting to conceive. Sunbathing should be avoided when taking high doses of Turmeric as it may enhance the damage caused to the skin by UV radiation.